Today the New Zealand dairy industry is worth approximately $18 billion dollars in export earnings and produces around 20.7 billion litres of milk per annum. It has become one of New Zealand’s biggest export earners and dominates our landscape and economy. However, the dairy industry began in a more humble manner during the 19th century colonial period in places like Hereweka on the Otago Peninsula. 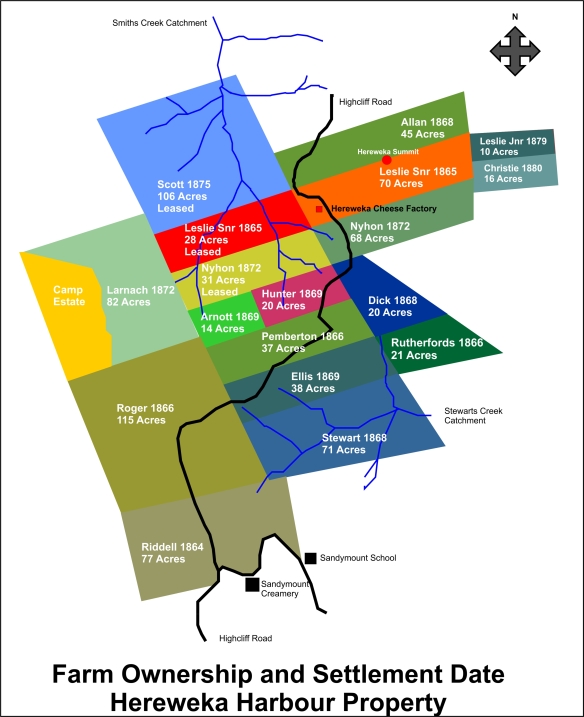 Farm ownership at Hereweka and the site of the Cheese Factory

Hereweka was divided into nineteen farms varying in size from 10 – 115 acres. Some were probably no more than subsistence properties, while larger farms were developed into economic units for the period. As the Hereweka bush was cleared and developed into pasture, dairying became the dominant type of farming on the property. With this development, Hereweka farmers began to look for opportunities to sell their milk and cream further afield to make important farm revenue.

In September 1877 a group of farmers on the Hereweka property met and decided to build a cheese factory. The building was to be situated on Captain William Leslie’s property adjacent to Highcliff Road. Very little is known about what the building looked like, though we do know its dimensions were 14 feet x 24 feet. Water was drawn from a natural spring and fetched through pipes from a wall built above Highcliff Road. The founding shareholders of the Hereweka Cheese factory were; 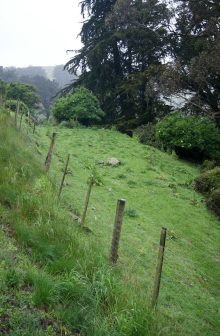 The cheese factory was not without its difficulties especially due to the steep terrain. Each farmer had different methods for getting milk to the factory. Robert Dick had special milk cans with flat sides that could be attached to a horse, William Hunter used a wheelbarrow while James Rutherford used a bullock with a sled. The first cheese maker at the Hereweka factory was Edmund Ward who began learning the trade under supervision from the experienced cheese maker John L McGregor. McGregor was the first cheese maker at the Springfield site near Pukehiki. Hannah Scott, the daughter of Thomas Scott assisted Ward in making the cheese at the factory. The cheese was sold directly to the George Street grocery store of Esther & Low, and the Otago Daily Times reported that the factory had produced 2.5 tons of cheddar cheese in 1879 valued at 6.5 pence/pound. However, disaster struck the factory in October 1881 when a massive bush fire destroyed the factory and many other farmsteads in the area. The Otago Daily Times gave a dramatic report on the 17th of October 1881 of the Leslie family and their attempts to save the factory.

“…the Harbour Cone Company’s Cheese Factory succumbed to the flames, though great exertions were made by Mr and Mrs Leslie, and Mr Leslie, jun., to save the building. Nothing with the exception of some bacon and a saw could be got out, and the whole building became a total wreck within a few minutes’ time. Mr Leslie’s dwelling-house was twice on fire, but was put out, though in one place the weatherboards were burned through. The dairy also had a narrow escape, one of the piles being burnt completely through before it was noticed. Mr Leslie’s byre and sheds were also destroyed. The factory, in which there were three cheese presses and other machinery, was insured in the Norwich Union Company’s office for £150, but the building was valued at £50 above this sum.”